1.The President’s Message
2.Evening Lectures 2012-2013
3.Two Calls for Papers
4.“We Are Not Amused”: Victorian Comedy and Humour
5.New Titles by VSAO Members

The new academic year is now well underway, and I am happy to say that the VSAO has an exciting slate of upcoming events to announce. The association’s evening lectures will resume on November the 8th with simultaneous events in Ottawa and Toronto: in Ottawa, Keith Wilson will give a talk rescheduled from last year,  “Thomas Hardy as Correspondent: Volume Eight of the Collected Letters” (Thursday, 8 November, at 7:30 pm in the ICSLAC Seminar Room, 201B St Patrick’s Building, Carleton University), and in Toronto, Tina Choi will speak on “Journeys Through Space and Time: Geography and Narrative in Victorian Railway Guides” (Thursday, 8 November, at 7:30 pm in the Bahen Centre, University of Toronto, 40 St. George Street).  In the winter, Mark Knight will give a lecture on 24 January, titled “Proclaiming Go(o)d Words: Religion and the Novel in a Mid-Victorian Periodical” (7:30 Thursday, 24 January 2013 University of Toronto—room to be announced). I am very grateful to all three of the speakers for agreeing to present their work, and to Barbara Leckie in Ottawa and David Latham in Toronto for arranging these events.

Looking further ahead, plans are well in train for the spring conference, to be held Saturday, 27 April 2013. We will once again be using the lovely venue at Glendon College. I am delighted to announce that two outstanding Victorianists have agreed to give plenary addresses—they are Professor Dennis Denisoff, of Ryerson University, and Professor Carolyn Williams, of Rutgers. The conference theme will be “Victorian Play(s): Excess and Expression.” A formal call for papers to be presented in the morning panel appears elsewhere in this newsletter.  I hope that many of you will consider submitting a proposal, and that all members of the VSAO will plan to attend what seems certain to be a wonderful event.

Finally, and looking even further ahead, the VSAO is continuing the practice of organizing a session at the annual Congress, to be held next June in Victoria. The call for papers can be found elsewhere in the Newsletter; the topic of next year’s session will be “‘We Are Not Amused’: Victorian Comedy and Humour,” and I encourage all members to consider submitting a proposal. The session is being organized by executive members-at-large Letitia Henville and Beth Martin—my thanks to both of them for their work on it.

Matthew Rowlinson
Department of English and Centre for Theory and Criticism,
University of Western Ontario

CFP: 46th Annual VSAO Conference, 27 April 2013, York University
The VSAO executive invites proposals for 20-minute papers to be presented at next spring’s annual conference on 27 April 2013.  The conference theme will be “Victorian Play(s): Excess and Expression.” Victorian acting, playacting, acting out; posing, positing, and performing; divinity and fabulousness: considerations of any aspect of Victorian life or culture connected to the theme are welcome. Please send electronic copies of proposals (300-500 words) and a brief biographical statement to Matthew Rowlinson by 30 January 2013.

CFP:  VSAO/ACCUTE Joint Panel , Annual Congress for the Humanities and Social Sciences,  1 June – 8 June 2013, University of Victoria
The Congress is in Victoria, British Columbia, next year at the University of Victoria, between June 1 and 8.  The VSAO looks forward to welcoming Victorianists from across Canada.  The call is out for papers for the 2013 VSAO/ACCUTE panel, “’We Are Not Amused’: Victorian Comedy and Humour.”  Interested scholars are invited to respond to the CFP, with the deadline extended to 28 November.  All submissions must include a 700-word proposal, a 100-word abstract, a 50-word biography, and the submitter information form to VSAOatACCUTE@gmail.com by 28 November 2012.

“We Are Not Amused”: Victorian Comedy and Humour 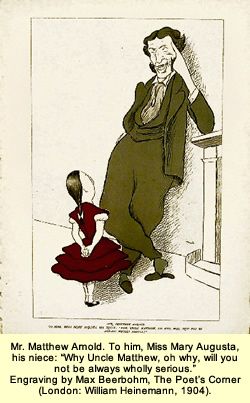 Though Oscar Wilde’s seminal play, The Importance of Being Earnest, satirizes the high-minded seriousness that was allegedly the defining characteristic of the Victorian age, artefacts such as Max Beerbohm’s caricature point to the period’s often deliberately concealed history of mirth and irreverence. Of Arnold himself, Beerbohm wrote that “it is because M.A. was so genuinely solemn (and even desperate) at heart that we love his outbursts of fun so much.” Comedy is under-explored in Victorian literary criticism, but it is pervasive in the texts of the era, from brief moments — Dickens’s caricatures and Thackeray’s asides — to more extended treatments, in Lear’s nonsense verse and Jerome K. Jerome’s popular Three Men in a Boat. This panel invites papers that explore comedy, humour, and laughter in Victorian literature and cultural productions. What functions did comedy and humour serve in Victorian texts? When is its humour riotous and anarchic, and when does it reinforce norms? How comfortably did comedy sit alongside the period’s idealization of moral and artistic solemnity? What effect does laughing at, or laughing with, texts and characters have upon our understanding of them? Why are the comic features of a scene or moment important? Papers may consider such topics as:

We inaugurate a new section highlighting recent publications by our members in the hopes of increasing awareness of the splendid scholarly works that are being produced. Calls will be made to the membership to request further items for each Newsletter. Here are our first two books submitted: