As many of you will know, this is an important jubilee year – not only for Canada as it celebrates its 150th birthday, but also for the VSAO as we mark our 50th anniversary! I’m happy to report that while the Association might now be considered decidedly middle-aged, it is in excellent health, and as vibrant as ever.

We have much to celebrate. In November 2016, WNED/WBFO, the public television station in Buffalo, contacted the VSAO to invite our participation in the premiere showing of the new BBC series, Victoria, in Canada. Our Association Secretary, Alison Halsall, served as the expert discussant at the event on 10 December 2016. (In case you’re wondering why an invitation didn’t reach you – the event sold out instantly!)

Our annual conference took place at York University’s Glendon College on Saturday 29 April. Exploring our conference theme, New Intimacies: Changing Interactions in the Victorian World, the three speakers for our morning panel examined different modes of communication in Victorian culture. Elissa Gurman analyzed the shifting balance between passive consent and active, willed choice in Eliot’s The Mill on the Floss; in her presentation, Maggie Tulliver’s expressions of romantic desire take these contrasting forms, even as the narrative emphasizes the need for rational, explicitly communicated consent. Turning to the representation of communication technologies in detective fiction, Lyndsay Day compared the gendered use of machines for communication, like typewriters and telegraphs, to the “information flow” of clues through which detectives like Sherlock Holmes and Loveday Brooke solved crimes. Lin Young addressed the means by which returning spirits were thought to communicate proofs of their existence through material possessions, domestic objects, and props; visualized at times through photography, they also often signalled their presence through markers of their former identities, like hats and boots. 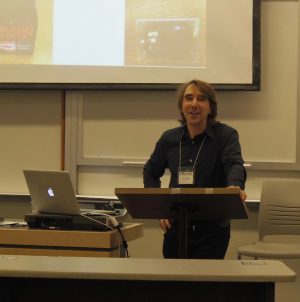 Our first keynote lecture, “Affordances of Victorian Literary Forms and Media Formats: Towards a Sociology of Literary Historical Audiotexts,” by Jason Camlot (Concordia University), revealed how changes in audio technologies determined the forms of communication that were possible during the late nineteenth and early twentieth centuries. From Edison’s attempts to design a phonogram that would conform to the postal service’s size and shape constraints, to the way the limited run time of recordings meant that they generally featured character sketches and compressed scenes rather than whole narratives, Camlot revealed the ways in which form and format mattered to the Victorians. 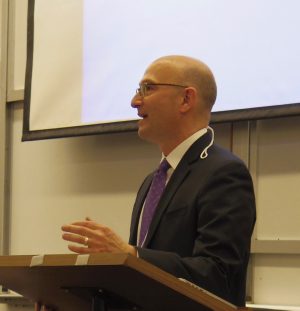 In the second keynote, “From Angry Father to Loving Friend: The Changing Face of God in Modern Britain, 1840s to 1930s,” Seth Koven (Rutgers University), traced a historical transformation in the deeply personal theologies of Victorians, as they recast the religion of their childhoods, one centred on a paternal, often punishing God. Reimagining Christianity with the figure of a friend, Jesus, at its centre, radicals like Edward Carpenter, Muriel Lester, and Agnes Maude Royden identified the social and sexual capaciousness – even the queer potential – of the category of friend as well in their daily interactions.

The conference was also the occasion for our annual business meeting, at which we said farewell – and a heartfelt thank you – to Margo Beggs, an outgoing executive member-at-large, and Alison Syme, VSAO president from 2013 to 15 and executive member ex officio since 2015. We also welcomed two new members to the executive, Emily Rothwell, a doctoral student in the Institute for Comparative Studies in Literature, Art and Culture at Carleton University, and Lin Young, a doctoral student in English at Queen’s University.

Our celebration of the VSAO’s fiftieth anniversary continues into May, with two events at ACCUTE (the Association of Canadian College and University Teachers of English, at the Congress of the Humanities and Social Sciences), which will be held at Ryerson University in downtown Toronto this year. Our first event is a sponsored panel, “Many Happy Returns: The Anniversary in Victorian Britain,” at 10:30am on Saturday 27 May, and the second is “The Future of Interdisciplinary Victorian Studies,” a roundtable with eight current and past members of the VSAO executive in discussion, at 1:45pm on Monday 29 May; details appear below. Please join us for conversation and for a slice of birthday cake on the 29th!

I also draw your attention to the next section of this newsletter, a list of panels and lectures whose focus is Victorian studies. You’ll recognize among the panellist’s names faculty and graduate student members of the VSAO. If you have plans to be in Toronto between the 27th and 31st, please think about attending some of these events – it’ll be a great opportunity to support our colleagues and to see other members of the VSAO.

This brings me to the end of my message – and to the end of my term as president. It’s been an honour and pleasure to serve the Association in this capacity, especially as it heads into its 50th year, and I look forward to remaining on the executive for the next two years. For those of you who weren’t able to join us on April 29th, I’m pleased to report that we unanimously elected a new president, Suzanne Bailey, Professor of English and Chair of Gender & Women’s Studies at Trent University. Suzanne’s research and teaching interests encompass Victorian poetry, nineteenth-century science, and women’s writing. With her commitment to interdisciplinary studies and her gracious leadership style, she brings a great deal to the Association, and we’re fortunate to have her as our president.

2.  Panels of Interest to Victorianists at Congress 2017 in Toronto