1. President’s Message
2. Panels of Interest to Victorianists at Congress 2016 in Calgary, AB

On Saturday, 30 April 2016, one of the first truly spring-like days of the year, the VSAO welcomed a large group of faculty and graduate students to York University’s Glendon College for its 49th annual Conference. The theme, Vicarious Victorians: Transmitting Experience in the Nineteenth Century, brought together a stimulating array of talks about nineteenth-century media of vicarious experience, from fiction to photography, stereoscopes, and telegraphs.

Dr. Danielle Barkley, who received her PhD from McGill University in 2015 and now teaches there and at Bishop’s University, presented a paper entitled, “Receiving a Vicarious Education in Braddon’s The Doctor’s Wife,” in which she proposed that vicariousness operates at both thematic and compositional levels in Braddon’s 1864 novel. The Doctor’s Wife suggests that the heroine’s indulgence in fantasy and romance, inspired by too much reading, is ultimately unproductive. But at the same time it points to the value of vicariousness in offering English audiences, through its loose adaptation of Flaubert’s Madame Bovary, a chance to experience the racy French original at a safe remove. Martin Danahay, Professor of English at Brock University, presented “Transmitting War: Roger Fenton in Crimea, 1855,” an analysis of Fenton’s 1855 war photography. Focusing in particular on Fenton’s striking “The Valley of the Shadow of Death,” he considered this image of cannonballs strewn across an otherwise empty road with relation to William Howard Russell’s politically influential journalistic accounts of the war, Tennyson’s “The Charge of the Light Brigade,” and the traditional genre of the still life, as he suggested that Fenton’s photograph invites an evaluation of the relationship between aesthetics and politics. Erin Piotrowski, a doctoral candidate in the University of Toronto’s Department of English, gave the morning panel’s final paper, “Powers of the Virtual: Technology and Subjectivity in Thomas Hardy’s A Laodicean.” Through an analysis of the novel’s recurrent references to machines – steam engines, railways, telegraphs – she pointed to the ways in which these technologies enable the expression of agency, especially on the part of women characters, as well as how they permit forms of otherwise dangerous intimacy. Through this nascent “cybernetic subjectivity,” she suggested, Hardy reimagines the romance in modern terms. 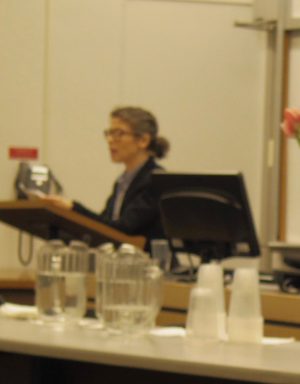 Our first keynote speaker of the afternoon was Rachel Ablow, Associate Professor of English at the University at Buffalo in New York. In her lecture, “Wounded Trees, Abandoned Boots: Thomas Hardy and the Homelessness of Pain,” drawn from her forthcoming monograph, Victorian Pain, she traced the emergence of a modern, “impersonal” conception of pain, a development she linked to transformations in mid- and late-nineteenth-century science, such as the rise of anesthesia and theories of natural selection. Through close readings of Hardy’s work, including The Woodlanders and Tess of the d’Urbervilles, she focused on what she called pain’s “homelessness,” its inability to be assigned to a particular individual or subjectivity. Often seeming to reside in nature or inanimate objects, pain becomes a generalizable condition, which cannot always be relieved or even understood.

Our second keynote speaker was Jules Law, Professor of English and Comparative 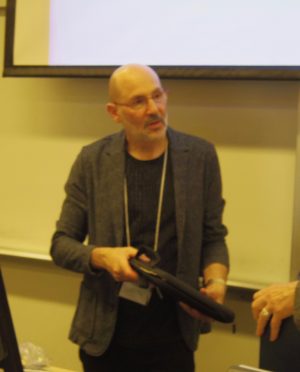 Literature at Northwestern University in Illinois, and Charles Deering McCormick Professor of Teaching Excellence. His lecture, “Virtuality at the Heart of Realism: Information and Animation in Middlemarch,” drawn from research for his current project, Virtual Victorians: Technologies of Immediation in the Nineteenth-Century Novel, posited a divergence in the nineteenth century between Romantic and Victorian conceptions of the virtual; where the former were based in emotion, Victorian technologies like the stereoscope, phonograph, and the realist novel produced an illusion of immediacy through informational density and mediation. Eliot’s Middlemarch, the focus of the last section of the lecture, not only offers readers a virtual experience, but also depicts characters like Dorothea Brooke and Tertius Lydgate themselves encountering worlds of seemingly limitless depth and density.

The April conference marked the departure of two of our executive members-at-large: Katherine Magyarody and Noa Reich. Over the past two years, Katherine and Noa have been enthusiastic and tireless in the organization and promotion of the VSAO’s activities. At our business luncheon, the membership welcomed Brooke Cameron, whom we elected to the position of executive member-at-large; Brooke is Assistant Professor of English at Queen’s University, where she specializes in late-Victorian slum writing and transatlantic accounts of working-class migration and poverty. We’re grateful to Katherine and Noa for their service, and to Brooke for her willingness to join us. Finally, we’d like to thank the Department of Visual Studies at the University of Toronto Mississauga, and the Departments of English and of Humanities at York University for their financial support, as well as our members, whose annual renewals and generous donations have allowed the VSAO to maintain its intellectual wealth and financial good health as it heads into its fiftieth year.

2. Panels of Interest to Victorianists at Congress 2016 in Calgary, AB

The first panels listed, with paper titles and speakers’ names, are those that focus on the Victorian period. Panels with a shared or related focus (e.g., Romantic literature) are listed briefly at the end. Please confirm times and locations in the final program if you plan to attend. Programs for individual organizations can be accessed through the Congress website: http://congress2016.ca/program.

All are cordially invited to the two VSAO-organized panels at the upcoming ACCUTE conference in Calgary.

Joint Panel with the VSAO: Victorians Faking It: Fraud in Form and Fiction II – SS 113

3:15-4:45pm
Nineteenth-Century Science and Imperialism – ICT 114
(part of the Conference of the Canadian Society for the History and Philosophy of Science (CSHPS) program)

1:00-2:30pm
Stories of Self: Creating and Representing Indigenous and Settler Identities in Colonial Canada – Science A-247
(part of the Canadian Historical Association program)