1.Outgoing President’s Message
2.Panels of Interest to Victorianists at Congress 2013

A sunny April 27th saw VSAO’s 46th annual convention take place at York University’s Glendon Campus. Thirty-seven Association members gathered for a day of Victorian scholarship and conviviality. We were sustained by the usual superb lunch from Maria Franco, and by the VSAO’s traditional sherry at the end of the day. During the lunch, a business meeting was held, at which Alison Syme was acclaimed as the new VSAO President—congratulations to her, and thanks for agreeing to take over this position.

The main events of the day of course were the scholarly presentations, which were all of outstanding quality and gave stimulating perspectives on the conference topic from different disciplinary perspectives.

In the morning panel, three scholars presented their work. The first was Prof. Ann Colley, of Buffalo State: her talk showcased discoveries from the archive of Manchester’s Bellevue Zoo., which from the 1830s on put on display for its working-class visitors both exotic animals, such as elephants, and examples of advanced technology, such as generators. For almost all of its history, moreover, (the Zoo closed in 1977), the Zoo offered its visitors daily spectacular historical reenactments, often with imperialist themes. The second speaker on the morning panel was Simon Reader, a doctoral student at Toronto, who shared his work on Oscar Wilde’s notebooks, showing that notebook entries were a model and in some cases a first draft for many of Wilde’s aphorisms, and arguing that in consequence the cultural meaning of the aphorism as a genre can usefully be understood through information theory. The third paper on the panel was delivered by Prof. Marlis Schweitzer of York University, and concerned the child actress Jean Davenport and her performances in Kingston, Jamaica, and Newfoundland in the 1830s and 1840s. In their divided response to Davenport’s performances in classic male roles, colonial writers staged anxieties about the authenticity and manliness of the versions of English culture embodied on their stages and in their newspapers. 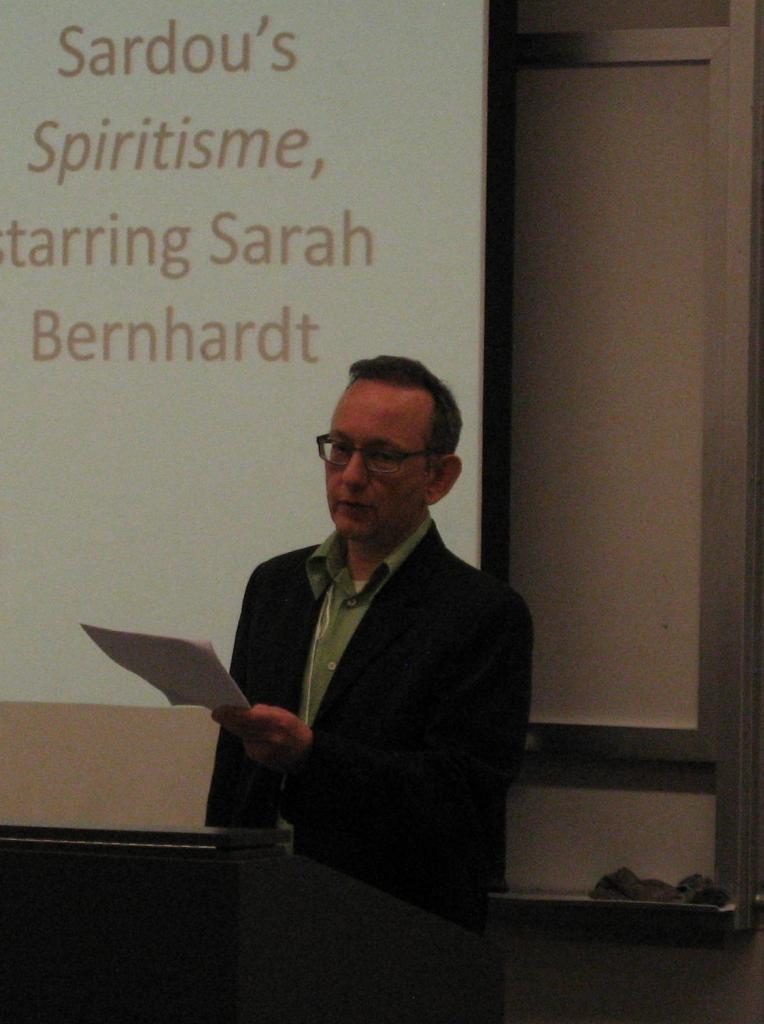 In the afternoon, we were treated to two superb plenary addresses. The first, by Prof Dennis Denisoff of Ryerson University, discussed the paradoxical combination of secretiveness with theatricality in late Victorian occultism, especially in the rituals of the Order of the Golden Dawn. The incorporation of fiction and theater into these rituals, and their influence in turn on the genres from which they borrowed, is a crucial part of the story of British culture at the fin de siècle, as Denisoff’s paper demonstrated. Golden Dawn rituals incorporated material from Richard Marsh’s The Beetle and in turn influenced Wilde’s Salomé, whose first English performance was directed by Florence Farr, a Golden Dawn initiate. 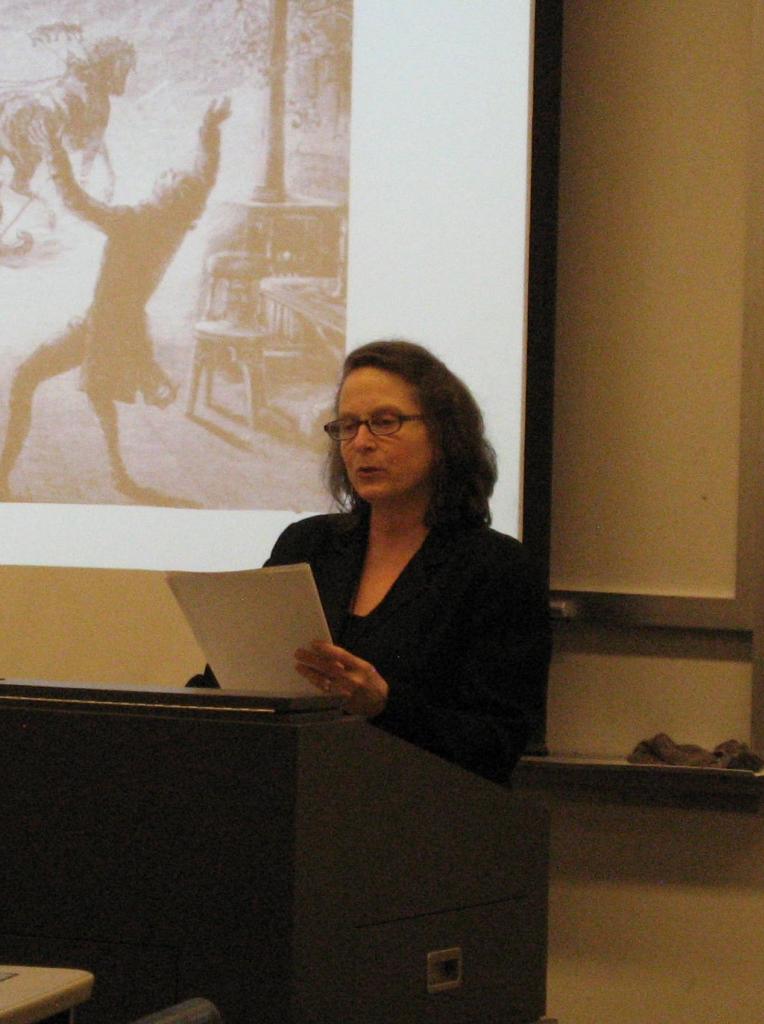 The afternoon’s second plenary, and the final event before the conference adjourned for sherry, “Reading Melodrama,” was by Prof. Carolyn Williams of Rutgers University.  This talk provided a formal typology of performance practices in Victorian melodrama, focusing above all on the tableau or“picture.” The melodramatic tableau derived in part from genre paintings, which indeed some tableaux reproduced. In something like a Benjaminian flash, the tableau disrupted linear time with a representation of time in a different schema. The tableau could represent simultaneity, or transformation, or it could project an inner psychological state of a protagonist as if onto a screen. In the latter part of her talk, Williams moved on to consider the music of melodrama, which was sometimes specially composed, as the cinematic score is today, and sometimes made up of stock motifs, known as “melos,” which were associated with particular moods and could be repeatedly reused. Her talk concluded by noting the ways in which the techniques and formal traits of Victorian melodrama persist in genres that have survived or succeeded it, such the novel, opera, and film.

All of the speakers and participants contributed to make a this a day of real scholarly interest for everyone who attended. The group included senior scholars and many graduate students, which augurs well for VSAO’s future and for the continued excellence of the spring conferences.

Matthew Rowlinson
Department of English and Centre for Theory and Criticism, University of Western Ontario

Panels of Interest to Victorianists at Congress 2013,
University of Victoria

The following is a list of panels happening under the purview of Congress 2013. The panels mentioned here focus on Victorian studies for the most part, but a few panels have been listed because they include an individual paper on a Victorian topic. Please confirm time and location details in the final programs; location details not yet available for all panels. Individual organization programs can be accessed through the Congress website: http://congress2013.ca/

Our VSAO panel will be happening at ACCUTE
Monday, June 3 from 1:30 – 3:15
3B – We Are Not Amused: Victorian Comedy and Humour
Location: TBA
Organizers: Letitia Henville and Beth Martin
Andrea Day (Toronto): “Parody in Alice’s Adventures in Wonderland and The Jungle Book”
Rachel McArthur (Toronto): “Victorian Comedic Theory: The Progressive Turn”
Emily Morris (Saskatchewan): “‘Their dress is very independent of fashion’: The humorous and the sartorial in Elizabeth Gaskell’s Cranford”

11:00-12:15
ACCUTE
2D – Contained Colonialisms
“‘Tainted with other Creatures’: Imperial Subjects in The Island of Dr. Moreau” Leah Golob
“A Farce of Bad Faith: Disability and the ‘Community Sick’ in Indra Sinha’s Animal’s People” Stephanie Yorke
“‘Dark Continents Within’: the Personal and the Political in Victorian Spiritualism” Amy Lehman

1:30-3:15
ACCUTE / VSAO
“We Are Not Amused”: Victorian Comedy and Humour
Organizer: Letitia Henville
“Parody in Alice’s Adventures in Wonderland and The Jungle Book” Andrea Day
“Victorian Comedic Theory: The Progressive Turn” Rachel McArthur
“‘Their dress is very independent of fashion’: The humorous and the sartorial in Elizabeth Gaskell’s Cranford” Emily Morris

3:15 – 4:45
CHA
24. Science and the Environment in North America, from the 18th to the 20th century
“Do Salmon Eat Moose? Reconstructing the Environments of the Pacific Northwest, 1793-1913” Ted Binnema (UNBC)
“Romanticism, the Sciences, and Northern Landscape Appreciation, c. 1790–1830” Angela Byrne (National University of Ireland: Maynooth & University of Toronto)
“‘Canada has already stripped the U.S. in this respect’: The Ties that Bound and Separated North American Forest Entomologists, 1900-30” Mark Kuhlberg (Laurentian)
Commentator / Commentateur : TBA

11:10-12:35
CASBC
Writing and Publishing in Canada at the turn of the 20th century
“From the Edge to the Center: Or, How Print Culture Affected the Imagined Emplacement of Nineteenth-Century Writers in Brantford, Ontario” Kathryn Carter (Laurier Brantford)
“We had Bliss Carman Here Last Week: The Canadian Author’s Association and Book Week” Gail Edwards (Douglas College)
“Enabling a Mathematical Culture in Canada: the Development of Mathematical Printing at the University of Toronto Press” Sylvia Nickerson (University of Toronto)

1:30 – 3:00
CHA
82. Intersection of Empire: British Imperial Frontiers in the Middle East in the Late 19th and Early 20th Century
“Seeing Like A Colony, Protesting Like A State: The Historical Significance and Legacy of the 1899 Egyptian-Sudanese Border” Martin Bunton (UVic)
“An Arab Island in an African Sea: British Ideas of Zanzibar, 1861-1897” Kris Radford (York)
“Imperial Hubris on the Persian Frontier of the Raj: Lord Curzon and the ‘Bushire Incident’ of 1903” Christopher Ross (UVic)