1.The President’s Message
2.Evening Speaker Plans for 2006-2007
3.Splendour in the Grass: The VSAO 2006 Spring Conference
4.Building Our Archives
5.Panels of Interest to Victorianists at the Upcoming Congress

My first year as the president of the Victorian Studies Association has flown by. It was an energetic and eventful year, with the participation of members continuing to be strong. And both our membership numbers and our finances have remained robust. So thank you all for your on-going support. The evening lectures from this past year were all very well received. I am especially grateful to Barbara Leckie for organizing an evening talk at Carleton University, and volunteering to organize another one for next year. Members from the University of Western Ontario – Anne Gagné and Corinne Davies are considering an especially innovative model that would combine a panel of speakers with one guest lecture. Abstracts of this past year’s evening lectures can be found on our website at www.ryerson.ca/vsao. Preliminary work has already begun on next year’s conference. In addition to repeating the components that made up the conference this year, we hope to recognize the fact that the conference will mark the VSAO’s 40th anniversary. If you have any suggestions, please don’t hesitate to contact me (denisoff@ryerson.ca). All the members who have contributed to organizing the past year’s lectures, the conference, and the panel “Victorian Modernisms” that will be part of the ACCUTE conference at the end of the month deserve a huge thanks, as do those who gave talks at our conference and lectures. In closing, I personally want to thank volunteers who have helped with the newsletter, written articles, and worked on the website, including all the members of our executive: Alison Halsall (Secretary), David Latham (Past-President and Treasurer), Christine Bolus-Reichertz (Member-at-Large), Anne Clendinning (Member-at-Large) and Stephen Heathorn (Member-at-Large). It was a pleasure working with you all, and I look forward to another dynamic year.

All the best,
Dennis 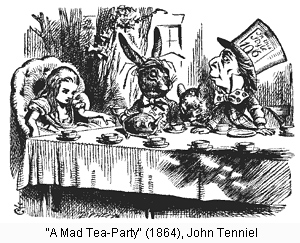 Last year’s talks proved extremely popular with audiences averaging around 35 attendees. This upcoming year the VSAO will organize another series of evening talks. Members from Carleton University, Ryerson University, York University, and the University of Western Ontario have volunteered to arrange our four evening talks for the year. We will have speakers in London, Ottawa, and Toronto. The Association always encourages contributions from people whose areas of specialization are diverse and interdisciplinary.

Splendour in the Grass: The VSAO 2006 Spring Conference 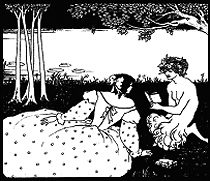 On April 29, 2006, the Victorian Studies Association of Ontario held its annual one-day conference at Victoria College at the University of Toronto. The conference was an inspiring success. The day’s papers were organized around the general topic of “Splendour in the Grass” and, as per tradition, the day proved bright and sunny with the new spring ivy giving an appropriately verdant warmth to the day.

Morning registration was followed by our opening panel, which featured four of our members. Barbara Leckie (Carleton University) spoke on “Splendour and Squalor: Housing for the Poor in Harriet Martineau, George Eliot, and Mary Ward.” D.M.R. Bentley (University of Western Ontario) delivered a paper entitled “‘A Glorious Field upon which to Work’: Environmental Determinism in Post-Confederation Canadian Culture and Aesthetics.”

Lisa Smith (University of Toronto) spoke on “The Other Side of Physiology: Desire and Knowledge inThe Lifted Veil .” The session ended with Barbara K. Seeber’s (Brock University) discussion of “Women and Nature: Jane Austen’s ‘Catharine, or the Bower’.” All four papers explored nineteenth-century notions of nature, but related it to a variety of topics, including epistemologies of class, Canadian stylistics, scientific rationalism, and ecofeminism.

After a rousing luncheon and business meeting, we were pleased to welcome our first keynote speaker of the day, Martin Danahay. A member of the Department of English Language and Literature at Brock University, Martin delivered a talk on “John Ruskin’s Garden.”

Accompanied by fascinating reproductions of gardens that Ruskin had designed according to Dante’s Inferno , Martin employed Ruskin’s metaphor of digging turnips as paradigmatic of his determination to rethink Victorian ideologies of labour. Although this metaphor allowed Ruskin to question more traditional views of class and masculinity, Martin demonstrated that, with “In Queen’s Gardens,” he reverted to his conservative view of women as asexual and linked to the splendour of nature.

After a brief break, Joy Dixon from the History Department at the University of British Columbia delivered our second keynote lecture, “‘Love is a sacrament that should be taken kneeling’: Sexuality, Religion, and the Troubled History of ‘Secularization.’” In her presentation, Joy discussed the secularization of discourses relating to sexuality, with a special focus given to the public and private writing of George Cecil Ives.

Joy contrasted various theological and scientific conceptions of sexuality in the Victorian era in order to demonstrate the ways in which issues of desire relate to the failure of faith in the nineteenth century. As Joy demonstrated, Ives’s agnostic Deism allowed him to locate a more liberated form of love that was separate from a distinctly Puritanical framework.

The conference concluded in highly civilized fashion with sherry and further animated discussion. Indeed, many participants were in no rush to leave. Eventually the patient staff at Burwash Hall nudged us out into the warm evening air.

The “Splendour in the Grass” conference was one of our best-attended functions to date, involving speakers, session chairs, and organizers from nine different Ontario institutions. This ability of the VSAO to bring Victorianists from across the province together proved one of the most splendid aspects of the day.

Many thanks to Morgan Holmes for his efforts in setting up the rooms and capturing the day on film. The VSAO Executive also thanks David Cook, Principal of Victoria College at the University of Toronto, and the Dean of Arts and Department of English at Ryerson University for their kind support of this event.

It’s time to celebrate! This coming year marks the 40th anniversary of the Victorian Studies Association of Ontario, the second-longest running Victorianist society in the world. This is a wonderful achievement and we have much to be proud of in our decades of work in promoting the study of all things Victorian, and in maintaining an ongoing awareness of Victorian history, science, and culture in Ontario itself. To commemorate this achievement, the VSAO Executive invites all of the association’s members to contribute to the development of a record of its history on our website. Past-President David Latham is spearheading the first step in this endeavour by making the association’s past newsletters available on-line. In addition, we aim to post a record of past conferences and evening lectures, as well as other events.

Please contact our secretary, Alison Halsall ( ahalsall@yorku.ca ), or me ( denisoff@ryerson.ca ; 416-979-5000, ext. 6135) with any information you have on past events. Photographs and suggestions for other materials that should be archived are especially welcome.

Panels of Interest to Victorianists at the Upcoming Congress

The panel “Victorian Modernisms” jointly organized by the VSAO and ACCUTE is scheduled for 27 May 2006, from 2:00-3:15 in Room SSB N105. Full details appear in the attached list.

Following is a summary of some of the panels at this year’s Congress (York University, 27 May to 3 June 2006) that might be of interest to VSAO members. At this point in time, not all panels have been listed on the various web sites, so check the final program for the full listings. The panels mentioned here all focus primarily on Victorian studies, but there are Victorianist papers in other panels as well. To get a full sense of the diversity of offerings, check this website: www.confmanager.com .

4:00-5:30
CSHM
The Birthing Room
Room: TBA
Lianne McTavish (New Brunswick): “Narratives of Blame and Self-Preservation in the Early Modern French Birthing Room”
Catherine Braithwaite (McGill): “For the Care of the City’s Destitute: Women, Health and the University Lying-In Hospital, Montreal, 1843-1873”
Alison M. Nuttall (Edinburgh): “Birth in the City: The Edinburgh Royal Maternity Hospital and the Medicalisation of Childbirth in Edinburgh, 1844-1924”